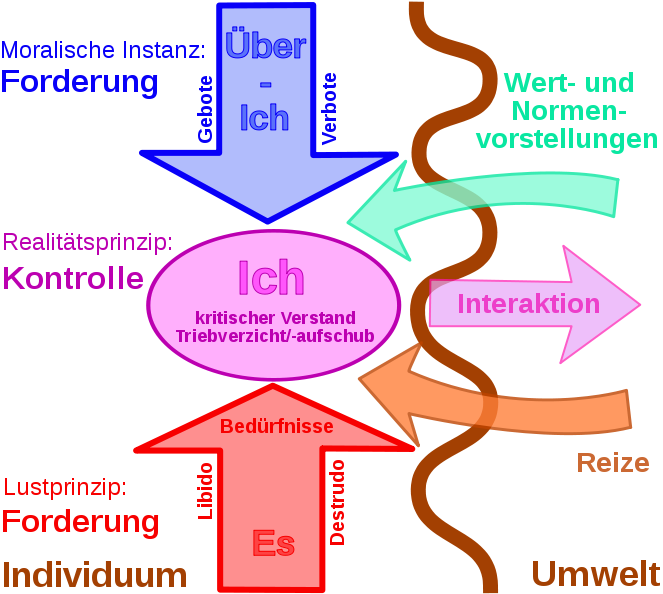 In psychoanalytic theory, a defence mechanism (American English: defense mechanism), is an unconscious psychological operation that functions to protect a person from anxiety-producing thoughts and feelings related to internal conflicts and outer stressors.Defence mechanisms may result in healthy or unhealthy consequences depending on the circumstances and frequency with which the mechanism is used. Defence mechanisms (German: Abwehrmechanismen) are psychological strategies brought into play by the unconscious mind to manipulate, deny, or distort reality in order to defend against feelings of anxiety and unacceptable impulses and to maintain one's self-schema or other schemas. These processes that manipulate, deny, or distort reality may include the following: repression, or the burying of a painful feeling or thought from one's awareness even though it may resurface in a symbolic form; identification, incorporating an object or thought into oneself; and rationalization, the justification of one's behaviour and motivations by substituting "good" acceptable reasons for the actual motivations. In psychoanalytic theory, repression is considered the basis for other defence mechanisms.Healthy...
Definition from Wikipedia – Defence mechanism

Sigmund Freud ( FROYD, German: [ˈziːkmʊnt ˈfʁɔʏt]; born Sigismund Schlomo Freud; 6 May 1856 – 23 September 1939) was an Austrian neurologist and the founder of psychoanalysis, a clinical method for treating psychopathology through dialogue between a patient and a psychoanalyst.Freud was born to Galician Jewish parents in the Moravian town of Freiberg, in the Austrian Empire. He qualified as a doctor of medicine in 1881 at the University of Vienna. Upon completing his habilitation in 1885, he was appointed a docent in neuropathology and became an affiliated professor in 1902. Freud lived and worked in Vienna, having set up his clinical practice there in 1886. In 1938, Freud left Austria to escape Nazi persecution. He died in exile in the United Kingdom in 1939. In founding psychoanalysis, Freud developed therapeutic techniques such as the use of free association and discovered transference, establishing its central role in the analytic process. Freud's redefinition of sexuality to include its infantile forms led him to formulate the Oedipus complex as the central tenet of psychoanalytical theory. His analysis of dreams as wish-fulfillments provided him with models for the clinical analysis...
Definition from Wikipedia – Sigmund Freud

Anna Freud (3 December 1895 – 9 October 1982) was a British psychoanalyst of Austrian-Jewish descent. She was born in Vienna, the sixth and youngest child of Sigmund Freud and Martha Bernays. She followed the path of her father and contributed to the field of psychoanalysis. Alongside Hermine Hug-Hellmuth and Melanie Klein, she may be considered the founder of psychoanalytic child psychology.Compared to her father, her work emphasized the importance of the ego and its normal "developmental lines" as well as incorporating a distinctive emphasis on collaborative work across a range of analytical and observational contexts.After the Freud family were forced to leave Vienna in 1938 with the advent of the Nazi regime in Austria, she resumed her psychoanalytic practice and her pioneering work in child psychology in London, establishing the Hampstead Child Therapy Course and Clinic in 1952 (now the Anna Freud National Centre for Children and Families) as a centre for therapy, training and research work.
Definition from Wikipedia – Anna Freud