REWORK is a great book I enjoyed reading in 2010. 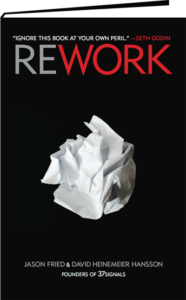 I loved to pass it out to the upcoming and young management I was working with at the time. Don’t know if they ever read it, though. This book still contains valid insights for trying to get a Startup or business of the ground these days. If you ever find yourself in a place of meeting addicts that manage and plan ahead without connecting to the craft and product … this might be the medicine and cure you need. For yourself… to leave the place and do your own thing or as a present to these people to make them realize something and hopefully change.

Basecamp (formerly 37signals) is an American web software company based in Chicago, Illinois. The firm was co‑founded in 1999 by Jason Fried, Carlos Segura, and Ernest Kim as a web design company.Since mid‑2004, the company's focus has shifted from web design to web application development. Its first commercial application was Basecamp, followed by Backpack, Campfire, and Highrise. The open source web application framework Ruby on Rails was initially created for internal use at 37signals, before being publicly released in 2004.In February 2014, the company adopted a new strategy, focusing entirely on its flagship product, the software package also named Basecamp, and renaming the company from 37signals to Basecamp. Jason Fried and David Heinemeier Hansson have published several books under the 37signals name.
Definition from Wikipedia – Basecamp (company)