This my review of Lucy, the new Luc Besson Sci-Fi movie with Scarlett Johansson. The movie is yet another attempt on the singularity theme.

In short: Scarlet Johansson is used as a drugmule and is exposed to this wonder drug that exhilarates her evolutionary process. She uses her powers todo good an fight the bad.

This kind of movie should have a genre name and feels like a Silicon Valley lobby group having their way to establish acceptance for artificial intelligence oversight. It is yet another portrail of an old recurring topic in cinema and storytelling where Technologist unlock the origin of meaning and human potential. Just look at movies like „Brainstorm“ (1983) and the recent „Limitless“ (2013), „Her“ (2012) and Transcendence (2014).  There seems to be a rejuvenated demand for this kind of movies and I found myself feel the urge to feed my inner child with it. I can’t deny that the taste of omnipotence, even only in catharsis, feels exhilarating. But it turned out I couldn’t enjoy this movie as it’s full of science-babel and deepities that really hurt the story. Given the topic I would have loved to see some consideration going into a message for the movie. But the story falls behind and serves merely as a backdrop to special effects, gore and fights.

Given that there are drugs that enhance the human metabolism this movie overephazises the human brain as this mystical container that just needs to be unlocked.  It’s an old and false myth that human only use 10% of the their brain and the little journey into esoteric access to our brain is a discredit to science.

Ten percent of the brain myth

The 10 percent of the brain myth asserts that humans generally use only 10 percent (or some other small percentage) of their brains. It has been misattributed to many celebrated people, notably Albert Einstein. By extrapolation, it is suggested that a person may harness this unused potential and increase intelligence. Changes in grey and white matter following new experiences and learning have been shown, but it has not yet been proven what the changes are. The popular notion that large parts of the brain remain unused, and could subsequently be "activated", rests in folklore and not science. Though specific mechanisms regarding brain function remain to be fully described—e.g. memory, consciousness—the physiology of brain mapping suggests that all areas of the brain have a function and that they are used nearly all the time.
Definition from Wikipedia – Ten percent of the brain myth

I know that this movie has to be considered as Sci-Fi and pur entertainment but Luc Besson is ripping off the fiction of Alejandro Jodorowsky and the recently deceased Comicbook-Artist Moebius. They created this amazing universe with the main main character John Difool. The story revolves around him after an sucicide attempt and uses the exterior adventure to transform him throught the book into a trascendental being. The comic books heavily use visual storytelling to transport inner emotional states. Luc Besson already relied heavily on the mentioned work in „The fifth element“ and continues todo so. I consider remixing an essential part but borrowing from such deep and great material should at least honnor the orginals qualitywise.

Luc Besson didn’t stop here at borrowing. There are cut scences containing parts of the wonderful movies from Ron Fricke while Morgan Freeman is giving his false 10% myth. Sad that such great work is reduced to stock footage in this flic. 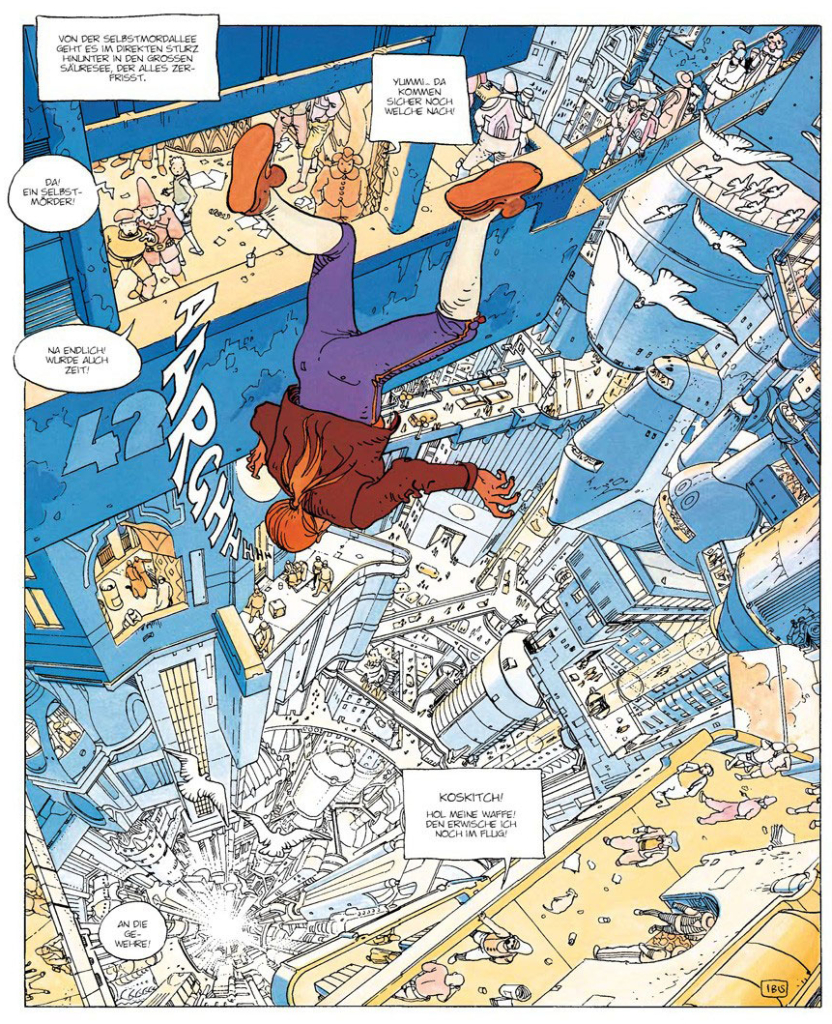 Moeibus at his best on „The Incal“. It was called the “fifth essence“ on the english market.

There could have been so many other plot points and turns that could have given rise to a omnipotent main character then manufacturing them from false science.

I also find the use of technology in the movie rather disturbing. Scarlett Johansson builds this black nanobot computer that rises like a medieval cathedral in the middle of the room. On a level of symbolism this fits the mystic science approach as it represents the believe in futurism. The movie concludes with the technological advanced being, that once was Scarlett Johansson, filling the empty chair of God. 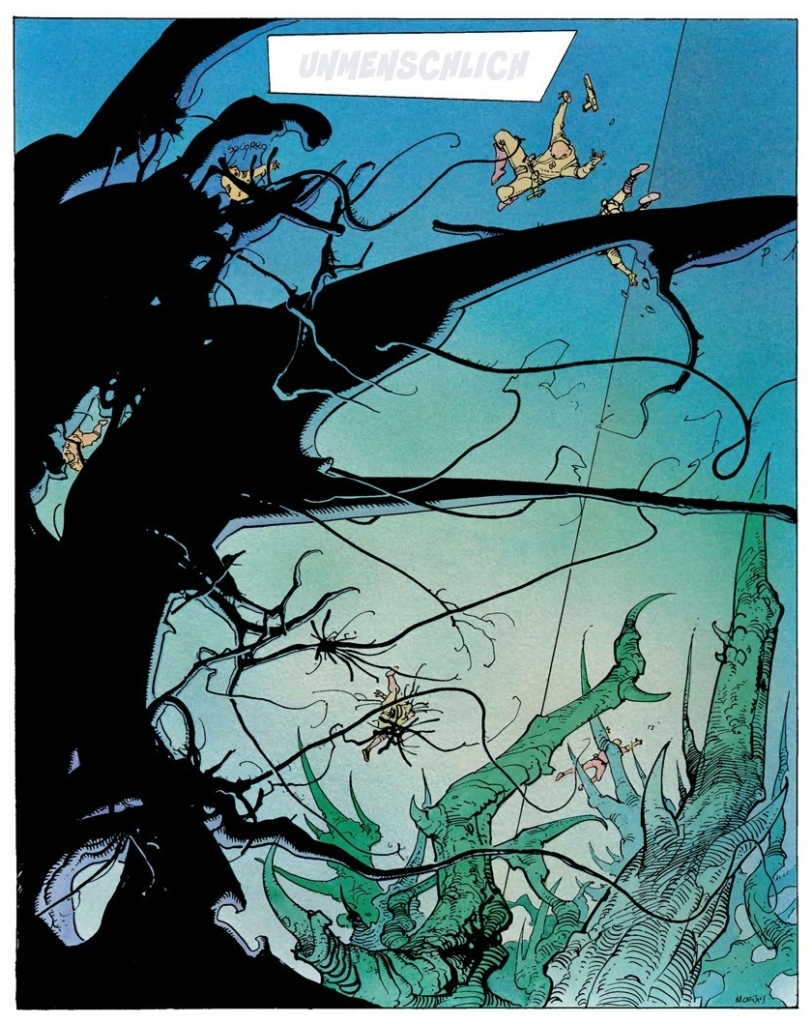 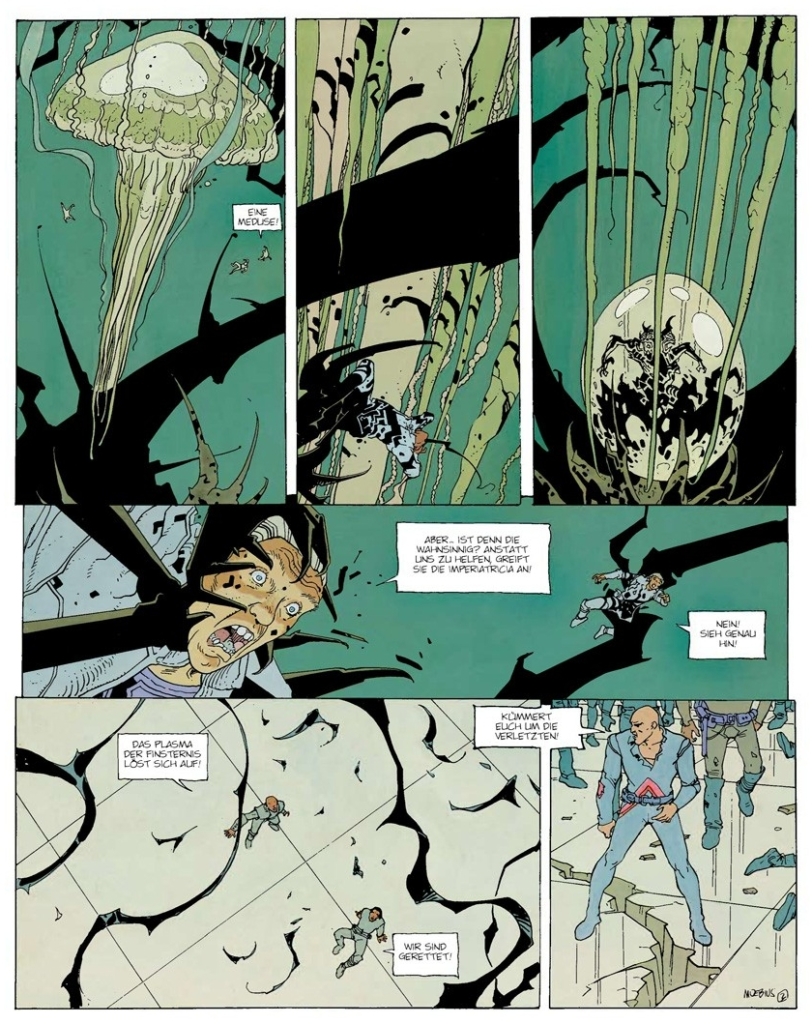 Just look at the Moeibus panels corresponding to the nano based computer in the movie.

For me this represents the fact that science has killed religion but in itself becomes a new belief system. Science killed God and now tries to reinstate that concept with technology instead of overcoming it. Religion with it’s fictional characters is and always was, in my opinion, a tool of power and governance. So one shouldn’t wonder that technology is filling the „moral void“ left behind from secular science.

I just hope that this nonsense techno-science babel doesn’t do more harm the good and people actually bother to distinguish between facts and wishful thinking. This movie is creepy in the way that it exploits the misinformation and instead of clearing things up deepens their use.