These lectures had a great impact on my understanding of the probabilistic nature of light. Feynman delivers the arguments with his great humor and imagination while translating the mathematics of quantum mechanics into simplified and understandable concepts.

I read Feynman’s book „Surly your joking, Mr. Feynman“ in which he describes his life and upbringing. His father played an important role and in a few short stories revolving around his insights and personal advancements you get the picture of a person sure of him self with a vivid imagination and a sharp analytic mind. He also has this settle way to explain the matter to non experts and his rational about understanding can be found at 00:21:50

Don’t turn away because it feels incomprehensible …

The main lecture starts a 00:34:40 with the separation of light into mono chromatic light. Then he introduces the concept of measuring light with a photoncounter 00:37:20 and goes on to show that in large numbers reflection occure with certain percentages even though light is measured in discrete corpuscles. This serves as the introduction to his first conclusion: Light has a probabilistic nature  00:48:00. First weird thing is that Photons seems to „know“1 about their predecessor in the photocounter to produce equal probabilistic results over a varying time.

Feynman goes on to explain the rainbow-effect on soap bubbles. His explanation is given by a varying pattern of reflection intensity seen on the soap bubble when only observed under monochromatic light  00:50:00. Different wavelength of light produce different patterns2. The patterns where also found by Newton experimenting with lenses. The reflection coefficient was found to be oscillating based on the distance between lens and reflective surface.

Feynman then explains the solution in a very comprehensiv and graphical way 00:57:05 with an abstract vector-like approach that yields combinded propabilities: The square of the amplitude.

While listening to Feynman I am reminded of the good old days of hand crafted graphics. We used two overlapping waves to draw a circle. The trick is to bind the COS and the SIN function to the X and Y axis. Then multiply the spinning unitvector this produces by R(adius) and offset it to any given position by adding another vector.

Playing around with Feynmans ideas 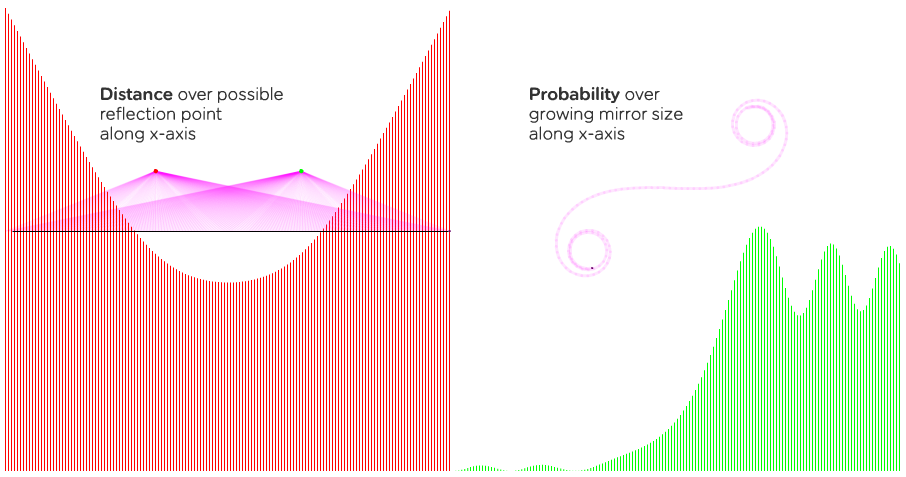 So recreating the Feynman examples was fun3. It also gives a completely new understanding on ‚curled up‘ dimensions. They are regions of reality that don’t effect reality as much because the probability of effects occurring is (and stays) small and therefor improbable. At least thats how I understud it. In the given example Feynman uses the reflexion on a surface (mirror) and shows that one can cancel out certain areas of the mirror to influence (for example increase) the probability to reflect light (rather then being absorbed). Conclusion: This simple geometric exercise explains a lot and using this model allows even beginners (like me) to tinker with probability and to create (in theory) a starwars laser canon4.